In the late 1890s, there was a revival of patriotism and interest in the founding of the United States. Women had a desire to express their patriotic feelings, but were excluded from men’s organizations formed for this reason. A group of pioneering women in Washington, D.C., formed their own organization and the National Society Daughters of the American Revolution (NSDAR, DAR)  was created on October 11, 1890 and incorporated by an Act of Congress in 1896. Today there are approximately 185,000 members in 3,000 chapters in all 50 states, Washington, D.C., and international locations. Our international locations have chapters in twelve countries and one U.S. territory.

Rainbow River Chapter is a member of the DAR. Our chapter was organized in 2016 and is made up of Daughters who are vibrant, active women passionate about community service, preserving history, educating children, as well as honoring and supporting those who serve our nation.

We are a growing chapter and welcome all women who are eligible to join DAR. If you would like additional information about joining DAR click here. 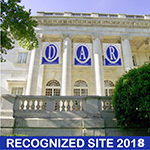 Eligibility: Any woman 18 years of older, regardless of race, religion, or ethic background, who can prove lineal descent from a patriot of the American Revolution, is eligible for membership. If you would like more information click here